To many, it sounded like a fairy tale: you take a bit of money, invest it wisely and within three years it will have multiplied 15 times over. Yet this is exactly what the European Investment Bank Group and the European Commission set out to do as part of their plan for economic recovery after the worst financial crisis since the late 1920s. With the Investment Plan for Europe, they promised to trigger €315 billion of additional investment in the EU by mid-2018. The key to fulfilling this promise was a €21 billion guarantee programme, the European Fund for Strategic Investments (EFSI). In July 2018, exactly three years after EFSI came into being, the EIB Group surpassed its initial goal.

With its mandate extended and increased in 2017, EFSI has now also exceeded its second target of supporting €500 billion in investment. It has done so ahead of schedule, while mitigating the impact of COVID-19 on Europe’s economy. But what can €500 billion do for a continent? Here are some answers to that question.

Helping where it is most needed 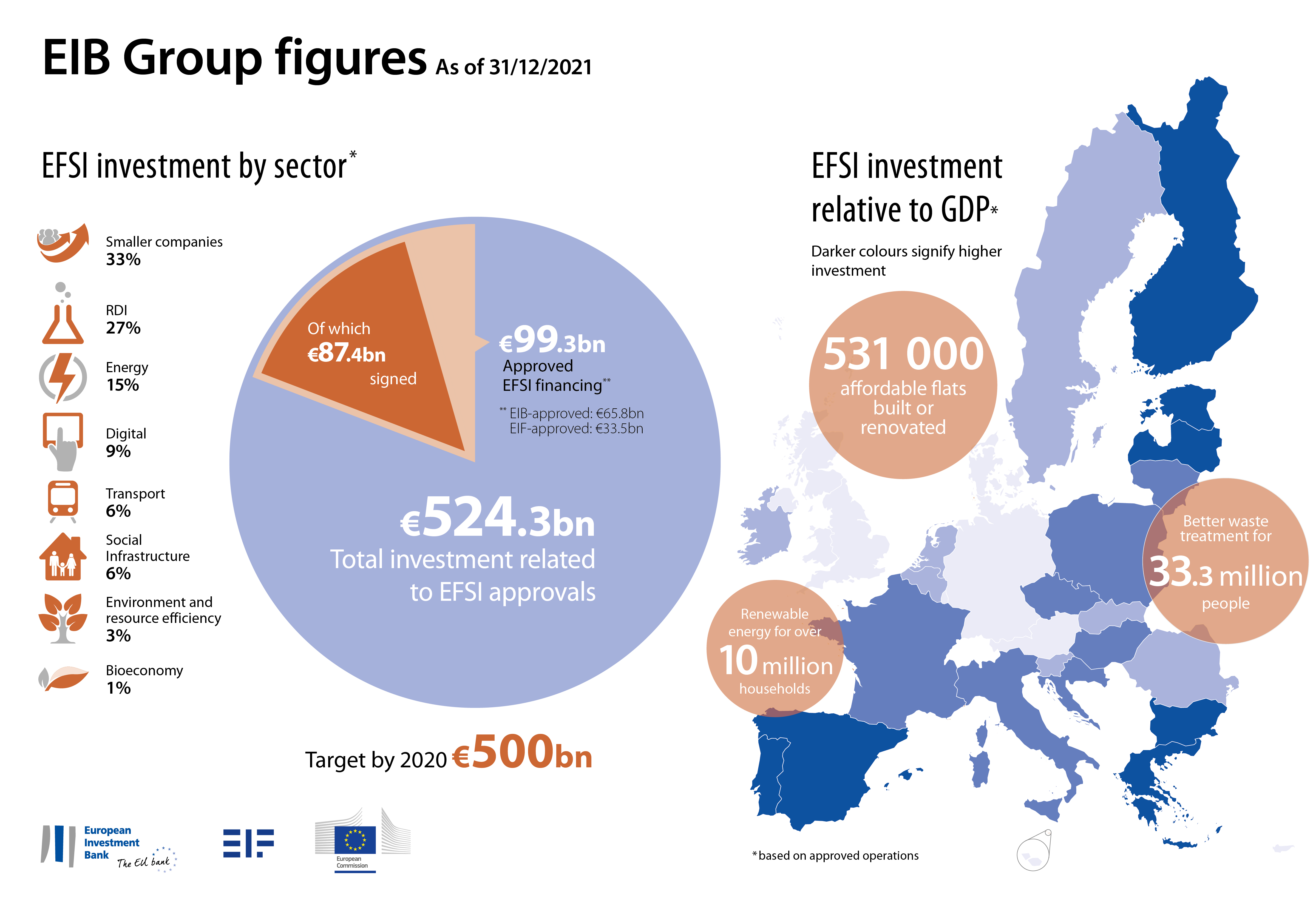 The Investment Plan for Europe continues to mobilise investment to boost the European economy in a sustainable way.

Economic estimates suggest that by 2022 investment under EFSI will increase GDP by 1.9% and add 1.8 million jobs compared to the baseline scenario.

Assessing impacts on jobs and growth

Public interventions are often associated with excessive red tape. One key to the success of EFSI is its efficient governance structure, which is responsive to constant changes of the markets. EFSI beneficiaries follow the same procedures in place for a traditional EIB loan. If the project meets the EFSI criteria, it is presented to a group of eight independent experts, the Investment Committee. This group decides if the project qualifies for backing by the EU guarantee, ensuring the investment does indeed add value to what would have happened without taxpayer assistance. An independent evaluation of the initiative found that the burden on EFSI beneficiaries was generally modest.

Investing where there are gaps, not following country or sector quotas, is one of the guiding principles for EFSI. To make best use of scarce resources the initiative needs to be market-driven rather than shepherded by politicians picking beneficiaries around a conference table in Brussels or other European capitals. A thorough assessment by EIB experts and members of the independent EFSI Investment Committee guarantees that the financing goes to viable, yet often challenging projects with true added value for Europe.

Between 2007 and 2013 the EU experienced a massive decline in investment. One of EFSI’s main objectives is to stimulate investment, especially from the private sector. Enabling the EIB Group to take higher risk in a project, the initiative shortens the gap between what private investors may consider economically viable and unviable. With great success: two-thirds of the expected investment mobilised by EFSI come from private sources. This represents almost 40 percent of the estimated investment gap in 2017.

All across the EU different sectors suffer from investment gaps. Still, some countries are in higher need of investment than others. Even though no country quotas apply, EFSI backing has predominantly benefitted the regions hit hardest by the crisis: measured in relation to the size of the economy, Greece, Portugal and Spain have, for a long time, featured among the top ten in expected mobilised EFSI investment – as have Estonia, Bulgaria and Poland. In addition, calculations of the EIB and the EU's Joint Research Centre point to the fact that the direct impact on jobs and GDP-growth is particularly pronounced in crisis-hit countries.

Often, EFSI-backed projects are highly innovative, undertaken by small companies without a credit history, or they pool smaller infrastructure needs by sector and geography. Supporting such projects required the EIB Group to develop new financing products. From venture debt with equity features to investment platforms, investment at proof-of-concept phase or in payment-by-result schemes, products are evolving to meet the changing needs of specific clients, sectors or countries. Not only has this changed the DNA of the Bank, it also revolutionised the way Europe finances its priorities.

See it in action

With EFSI we support key sectors by financing thousands of projects that make our continent, fairer, greener and more modern.

Find more videos on EFSI in our playlist

Since its launch, hundreds of projects have benefitted from EFSI and all of them contribute to making our continent more social, green, innovative or competitive. The examples below give a glimpse into how EFSI helps projects flourish.