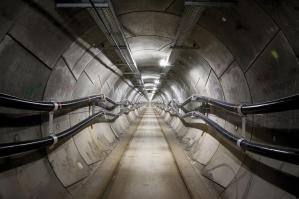 The long-awaited power line across the Pyrenees, which will be inaugurated on Friday, is the interconnection that breaks all records: 65 km of buried high voltage cable lines with a capacity of 2 GW and a construction cost of EUR 700 million. For what purpose? To double the energy exchange capacity between France and Spain.

French and Spanish power grid operators have completed a long-awaited power line across the Pyrenees that will allow export of excess Spanish renewable energy and ease one of the worst network bottlenecks in Europe. Under discussion for some twenty-five years but officially launched by the Zaragoza agreement initiated in 2008, the new interconnection between Baixas (near Perpignan on the French side) and Santa Llogaia (near Figueras on the Spanish side) will undergo a few months of testing before it becomes  commercially operational in June 2015.

Financed partly by a EUR 225 million European Union subsidy under the European Energy Programme for Recovery and a EUR 350 million loan from the EIB, the project should also allow exports of Spanish wind energy to Europe and lower power prices by smoothing out cross-border peak demand. The last France-Spain power lines were built in 1982. The previous interconnection’s saturation levels (45% of the time in the France to Spain direction, and 22% of the time in the opposite direction) meant that it was becoming increasingly important to increase capacity. Moreover, boosting links to isolated power markets such as Spain, Portugal, Italy, Britain and Ireland is a key element of the so-called Juncker plan, announced in November last year, which aims to stimulate investment for strategic projects across Europe.

A few world records along the way 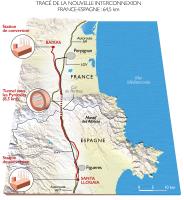 The new interconnection is a construction which breaks records. It holds a power record with 2,000 MW produced from innovative VSC (voltage source converter) technology with the ability to rapidly convert alternating current to direct. RTE have stated that half of the EUR 700 million was invested in Siemens-built stations which can quickly change the direction of the flow and enable it to run for miles without power loss.

The project also marks a record in terms of length, boasting the world’s longest underground high-voltage cable. To keep the pristine eastern Pyrenees mountain-range free of obstructive power pylons, it has been entirely buried. The high-tech DC cables, designed by Italy's Prysmian, came to a cost of EUR 250 million and are insulated with polyethylene to avoid the use of oil inside the casing, therefore minimising environmental risk.

Making the best use of Spain’s power capacity

Spain invested heavily in thermal and renewable power capacity just before the economic crisis hampered demand. In 2014, its installed capacity stood at 102-gigawatt (GW), more than double the 39 GW maximum peak power demand last year. Spain proudly boasts 30 GW of renewable capacity, main wind, and 20 GW of hydropower, managed by firms such as Iberdrola, Endesa and Acciona. A second cable planned to run underwater along the west side of the Pyrenees will lift French-Spanish interconnection capacity yet further to 5 000 MW. It is expected to come go live after 2020.