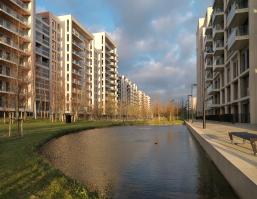 The EIB has supported the pre-purchase and retrofit of 1 379 athletes’ flats into affordable new houses for East London residents. This GBP 265 million funding has added some much-needed stock to the London housing market.

Stratford, chosen as the main site of the 2012 London Olympic Games, ranks among the poorest areas of Britain. It has rampant unemployment and dire child poverty levels. Today, the Olympic Park has changed the area beyond all recognition. It has an international train station offering links to London’s key locations and the largest shopping centre in Europe. According to the Mayor of London, the reconversion of this polluted brownfield site into East Village, a brand new neighbourhood with 2 818 homes, would have taken at least 70 years to materialise without the Games.

It will provide communal and commercial facilities, including new schools for 2 000 students aged 3-19, a state-of-the-art medical centre, offices, and a host of cafes and shops immediately next door to Queen Elizabeth Olympic Park and its world-class sporting venues. Alongside these great facilities, residents will benefit from modern spacious apartments located on the doorstep of 285 hectares of parkland, waterways, and nature trails connected by paths for jogging, cycling and walking.

The Olympic Delivery Authority and their contractors are busy removing all of the temporary structures used during the Games themselves, and installing new fitted kitchens into each of the apartments. About half of these flats, a total of 1 379, are being handed over in stages to Triathlon Homes, to house some of the thousands of low to middle-income Londoners in the five Olympic boroughs of Newham, Hackney, Waltham Forest, Tower Hamlets and Greenwich. These are currently classified as being “in housing need”. Triathlon Homes will offer the choice of buying or rental to people of various income levels.

“Works including flooring, painting, decorating, plumbing and electricity are being completed. The first roads around East Village are open for traffic. Chobham Academy has now opened to its first 700 students and the health centre is open with more than 500 patients already registered,” says Olaide Oboh, Sales and Marketing Director of Triathlon Homes.

All in all, there will be 1 439 private homes available to rent via Get Living London, in addition to the 1 379 affordable units. Homes will range from one bedroom flats to four bedroom townhouses offering large balconies and winter gardens. The plan is for privately rented and socially rented homes to sit side-by-side so that it will be impossible to discern which homes belong to private renters, and which are allocated for affordable or social housing.

“So far, interest has been phenomenal, especially for the affordable housing element. 500 families are ready to move in the social houses in the next few weeks and 800 over the next six to nine months,” adds Olaide.

Over 12 000 people worked on the construction and retrofit of East Village, and the new housing community in East London should foster employment opportunities for the local communities and beyond. There are currently 2 300 workers on site, putting the finishing touches to the apartments and townhouses.

The urban regeneration of the area has brought about significant environmental benefits including the replacement of contaminated brownfield sites and derelict buildings with high quality open space and parkland. Olaide assures that “the highest energy efficiency standards have been applied to the financed housing stock,” adding that “there will be a plant outside that generates all the electricity used by residents. This has never been done in the UK. Water to flush the toilets and to water plants will be recycled in a plant while green roofs will help insulate the building and encourage wildlife.”