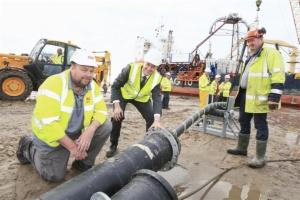 Ireland's first electricity link with Great Britain was officially opened in September. The Interconnector marks the first successful launch of an EIB-backed EU recovery plan energy project. It is the largest single piece of energy infrastructure to be built in Ireland since 1929.

The East West Interconnector runs between Deeside in north Wales and Woodland, County Meath, in Ireland. Approximately 260 km in length, the underground and undersea link has the capacity to transport 500 megawatts – enough energy to power 300 000 homes.

"The Interconnector ties our energy markets closer together," says Dermot Byrne, Chief Executive of EirGrid, the state-owned company in charge of building this strategic electricity link. "It gives all concerned additional assurance of supply and it is the single most important step in allowing Ireland to exploit and to export its enormous resources of renewable energy. Critically, it also allows us to access energy from Britain and from across the European continent, which will bring more competition to the energy market and put downward pressure on prices," he adds.

"The need for energy infrastructure development is one of the biggest energy challenges facing the EU," says EU Energy Commissioner Günther Oettinger. The need for action is clear. Ireland's East-West Interconnector will double electricity interconnection between the UK and Ireland and will provide a greater opportunity to trade electricity between the two markets. It is a key part of building a single European energy market."

As part of the European economic recovery plan to support key energy projects to help counter the effects of the financial crisis on the real economy, the EU provided EUR 110m for the Ireland-UK Interconnector. As an EU priority grid link, it is part of the trans-European energy network (TEN-E).

The EIB provided EUR 300m in financial backing for the construction of some 260 km of cable between Ireland and Wales. The new grid link is expected to transform the Irish energy market, opening opportunities to trade energy between the two countries and creating a market to export renewable electricity. It will improve security of supply and facilitate competition by connecting the Irish electricity market to the rest of Europe.

Opening the way for wind power

Ireland is still largely dependent on imported fossil fuels but has huge potential for wind power. With the Interconnector in place, reliance on wind-generated electricity can be increased. This is because additional supplies can be imported as a back-up for wind power and called on during calm days in Ireland. Likewise, when excess electricity, including wind-generated electricity, is produced in Ireland it can be exported to Great Britain.