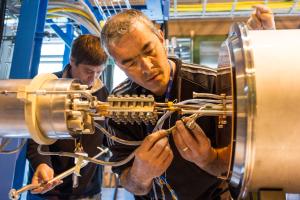 A sub-atomic particle, the Higgs boson, helps explain why all matter has mass. The EIB contributed to the financing of the 27 kilometre-long Large Hadron Collider at the European nuclear research facility (CERN) in Geneva where it was discovered.

"By investing in world leading research infrastructures such as the Large Hadron Collider, the EIB demonstrates that it is a vital institution for Europe's future. Building such a facility with a flat budget was challenging for CERN, and the task was eased by the EIB loan at the peak of the investment phase," Professor Rolf Heuer, Director General at CERN comments.

Back in 2002, the Bank provided a EUR 300m loan to finance the final phase of construction of the particle accelerator, where this historic scientific breakthrough happened in July. The EIB loan enabled the Large Hadron Collider to be completed faster than would otherwise have been the case. It also helped to finance the instrumentation for recording and analysing the high-energy particle collisions at the Geneva-based research facility.

"We were delighted to contribute to building such a unique European research facility, which is able to achieve such ground-breaking discoveries," says EIB Vice-President Philippe de Fontaine-Vive, responsible for Innovation. "Our long-term loans aim to mobilise collaborative funding streams in support of scientific excellence and international research cooperation."

The Large Hadron Collider, built in a 27 km-long circular mountain tunnel located on CERN’s Swiss and French sites near Geneva, is a new generation particle accelerator. It works with high-intensity particle beams colliding head-on at unprecedented energies to allow further essential research in the field of fundamental physics. Thanks to its open access policy, the large amount of data generated at CERN is available to the global scientific community.

Experiments in the field of particle physics are extremely costly to set up and technologically complex. The Large Hadron Collider represents one of the most expensive science experiment tools in history.

Over the last five years, the EIB has supported 400 projects with some EUR 68bn in loans to foster innovation. It has financed a number of important research infrastructure projects, including the European Molecular Biology Laboratory in Heidelberg, Germany, and the European Southern Observatory's world-leading suite of telescopes in Chile. The EIB contributes to funding research, development and innovation under academic research programmes and places strong emphasis on private sector innovation and knowledge transfer across sectors. 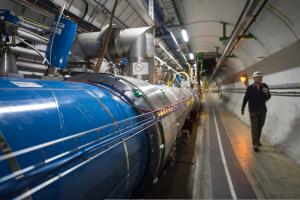