Where the need is acute

Where the need is acute 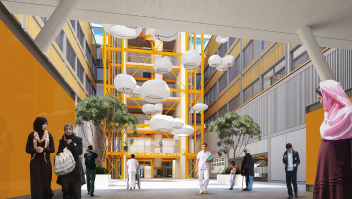 If you were in Birmingham when you happened to experience numbness in one side of your body, trouble speaking, and blurred vision, you might head for the City Hospital. The Emergency Medicine Team there would recognise that you were having a stroke and stabilise you. But for specialised treatment, you’d have to make a 10 minute journey by ambulance to the stroke unit at Sandwell Hospital in West Bromwich, some five miles away. That’s crucial time lost to a patient with an acute condition.

The Trust, which operates the two hospitals, aims to solve the problem of its split emergency services by building the GBP 350 million Midland Metropolitan Hospital half way between the existing facilities.  The new hospital will focus on acute cases, so everyone in the area will know where to go when they’re hit with sudden serious sickness, and when they arrive they’ll have immediate access to the full range of medical specialists. That will have real impact on the health – and sometimes the survival – of the 550,000 residents of the area it serves.

“Quicker access to the right emergency care means patients recover more quickly and more fully,” says Dr Roger Stedman, the medical director of the Sandwell and West Birmingham NHS Trust. “We may even save lives by reducing the complications that are sometimes associated with lengthy treatment.” 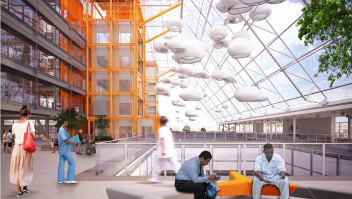 The 669-bed Midland Metropolitan will have Britain’s biggest Accident and Emergency facility and will be only the second UK hospital to specialise in the treatment of acute illness. The European Investment Bank is financing GBP 120 million of the total cost with the European Fund for Strategic Investments (EFSI), a programme backed by a EUR 16 billion guarantee from the European Commission and EUR 5 billion of the EIB’s own funds.

EFSI aims to generate EUR 315 billion in new investment by 2018. A major aim of EFSI is to back projects that might otherwise have struggled to get competitive financing from private investors. That’s usually due to some risk, which dissuades private investment or makes projects less affordable.

In the case of Midland Metropolitan, the risk was linked to the Trust’s contract with the privately operated and mostly privately owned company dedicated to overseeing construction and maintenance of the new hospital for 30 years.

The UK government had changed its general contract to impose somewhat more stringent performance requirements on this type of company, though it’s a structure commonly used in so-called Public-Private Partnerships. Since Midland Metropolitan was the first major hospital to be financed under those new requirements, the contract could have been viewed as more risky than previous comparable projects. Private investors may have feared that, were the project company to underperform, it might have its contract more easily terminated by the NHS Trust. That, in turn, might make it harder for the investors to recover their money.

It’s exactly the kind of “market gap” that EFSI was designed to fill, when it was instituted in 2015. So the EIB made Midland Metropolitan one of its first EFSI projects.

“The market hadn’t decided yet what it made of the risks in the new contract,” says Peter Jacobs, head of the EIB’s project finance division. “For us it’s an acceptable risk, particularly as the project also means the regeneration of an old industrial site.”

From nuts and bolts to electronic records 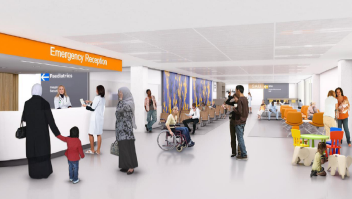 Midland Metropolitan will be built in Smethwick, west of central Birmingham, on a site first used to manufacture nuts and bolts in the 1840s and, more recently, as a car factory. When it’s completed in October 2018, it will house 9 operating theatres, a large intensive care unit, and a maternity unit with two specialised operating theatres.

“We will aim to assess, investigate and treat our patients quickly so that they don’t have to stay in hospital longer than necessary,” says Dr Matthew Lewis, the Trust’s director for medicine and emergency care. “We will certainly provide better care in this new environment.”

United Kingdom and the EIB