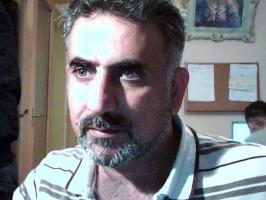 For refugees, microfinance loans are often the only way to get financing

As an engineering student in Iraq, Said al-Obaidi developed a method for sending encrypted messages between opponents of Saddam Hussein’s regime. When the underground group was busted in 1992, some of al-Obaidi’s co-conspirators were executed, some jailed for life. Saddam threw al-Obaidi into the notorious Abu Ghraib Prison for four years. But it was a decade later, after the dictator was deposed, before al-Obaidi fled the sectarian violence of his native land. “Under Saddam, you couldn’t talk, but you could live and work,” says the 56-year-old. “Now in Iraq, you can talk all you like, but you can’t live and work.”

Obaidi made it to Belgium as a refugee where he decided to start a business repairing laptops. Banks turned him down for the EUR 3000 he needed to rent a store. So in 2012 he went to microStart, a Brussels company that makes business loans lower than EUR 15000 and as small as EUR 500. Thanks to several microStart loans and al-Saidi’s hard work, his shop on leafy Boulevard Anspach in central Brussels is a success. “The bank needed me to have lots of capital before they’d even see if perhaps they could help me,” Obaidi says. “microStart are very kind people. I felt they were my friends, even before they gave me the loan.”

Refugees like Obaidi have few financing options when they’re trying to settle in a new country. Even migrants from within the European Union are increasingly rejected by banks’ automated loan procedures because they lack background data. With waves of refugees arriving from the Middle East and large movements of workers seeking stable incomes within the Union, microfinance loans are more and more important to the continent’s economic future. Already microfinance lenders report that anywhere from a third to 70 percent of their clients are foreign-born.

In Hackney, the London neighbourhood where Fair Finance has one of its offices, shopping streets are lined with so-called “high-cost lenders” offering small loans at interest rates of 700 percent or more.  The signs in the lenders’ windows are in Arabic – but also Polish, Portuguese and Spanish, because workers from other European countries are typically rejected by local banks for loans.

Fair Finance and other social lenders aim to rescue small businesses from the clutches of the high-cost lenders. An estimated 8 million people in Britain are “underbanked,” meaning that, while they have bank accounts, they lack the detailed financial history to obtain overdrafts or loans. The gap between the money small businesses need and the amount banks will lend them is put at GBP 2 billion a year.

“The space is immense,” says Rahman, who received an honour – the Order of the British Empire – from Queen Elizabeth II for his services to community finance.

“We get clients who’ve already taken on dreadful loans from high-cost lenders,” says Rahman. “The EIF guarantee allows us to take the risk of fixing our clients’ finances.”

The EIF is extending its programme of loan guarantees. On 19 October it signs with six microfinance lenders from around Europe, providing guarantees that will unlock loans worth EUR 237 million to 20,000 small businesses.

A piece of the old country enriches a new community

Refugees can certainly look like risky business propositions. Of the eventual recipients of EIF microfinance funding, half of those who started their own company were unemployed before they received the loan. But when they get the finance they need, refugees enrich their new community by creating jobs and adding cultural diversity. Take Vardan Babayan, who successfully brought Armenian cuisine to a place where food is taken rather seriously – the Tuscan city of Florence.

Babayan fled Armenia during a period of internal strife. He bounced from Russia, to Ukraine, and to Austria, before he reached Italy in 2012. Rejected by local banks and unemployed for a year in Florence, he finally found PerMicro, a microcredit company that was founded in Turin and now operates across Italy. Branch manager Francesca di Giuseppe gave Babayan a loan of EUR 25,000, which he used to create Ararat Le Bracerie, a restaurant selling traditional Armenian foods.

“It was my chance to open a little corner of Armenia in Italy and to feel at home,” says Babayan. “I had no other option. I had no Plan B.”

A prize from the King 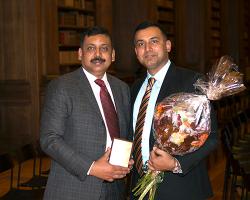 Finding financial refuge
The Gill brothers, Jamshaid (left) and Nassir, after receiving an award for their business achievements from the King of Sweden
Almi Företagspartner AB

Nasir Gill had already moved to Europe to work on the export end of the brothers’ company, Green Plank, when political violence swept Pakistan in 2009. His brother Jamshaid stayed in Lahore to run the company’s manufacturing and was increasingly frustrated by corruption, particularly local electrical company officials who squeezed him for bribes under threat of cutting off supplies to the factory. The last straw came when, with law and order breaking down, Jamshaid was held up at gunpoint by thieves.

“It was a nightmare there,” says Nasir, who now lives in Malmö. “Here we’re accepted as people and as entrepreneurs. Back there, we weren’t accepted at all.”

“Accepted” is the correct word, after all. On 14 October the Gill brothers, who got Swedish residence permits, received the award for New Builder of the Year from the very symbol of the Swedish establishment, King Carl XVI Gustav.

Helping people not to become refugees

Microfinance can also play an important role in stabilising unsettled regions, by alleviating the conditions that cause refugees to flee. The European Investment Bank has committed EUR 80 million to the European Fund for Southeast Europe, a partnership of donor agencies, international finance institutions, and private investors. In the last decade the Fund made 650,000 loans to small businesses in southeast and eastern European countries which are transit locations for refugees from outside the continent and the source of migrants within Europe. The loans created 500,000 jobs and helped build the kind of prosperity that enables people to remain in their home countries.

The same could be said for minority communities that benefit from microfinance. Sofia-based Mikrofond made three loans totalling EUR 6150 to Anton Topalov, a small farmer in southeast Bulgaria. Topalov employs five Roma on his farm, and hires more during harvest time.

Meanwhile, for the latest refugees, once they settle legally in a new country, microfinance is likely to be central to their economic success – and ultimately to their integration. “From the cultural, economic and social point of view, refugees are an opportunity for European economies,” says Patrick Sapy, director-general of microStart, the company that helped Said al-Obaidi finance his laptop repair shop in Brussels. “The way to create positive social and financial inclusion is to help them start a small business.”

Read more about the European Investment Fund and its microfinance products.