Turning Waste into valuable Resources for the Residents of Sofia

Turning Waste into valuable Resources for the Residents of Sofia 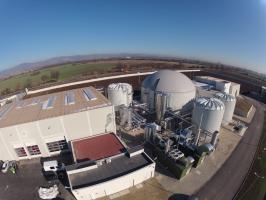 Prior to 2010, the city of Sofia was landfilling and storing all of its solid waste. This situation resulted in the waste of valuable resources and energy, and caused nuisances to local residents. To address this, the city of Sofia used an EIB loan to finance a series of municipal waste treatment facilities able to process approximately 500,000 tons of municipal waste per year.

Thanks to the new integrated waste management system, Sofia is now turning waste into a resource. Today, about 60% of the waste in Sofia is composted, recycled or energetically recovered. By diverting the biodegradable materials away from landfills, these facilities help to limit greenhouse gas emissions that contribute to climate change. In addition, the waste management system also re-injects valuable materials back into the economy; thus contributing to the circular economy, saving energy, and avoiding the production of greenhouse gases from virgin mining. The new system is also expected to create a total of 150 jobs for engineers, biologists, energy specialists as well as finance and logistics experts.

“The EIB played an important role in the modernization of Sofia’s waste treatment infrastructure not only through its financial support but also with the extensive technical advice it provided. The Sofia municipality is very grateful for the EIB’s involvement and hopes to continue this collaboration for future projects in the sector”, explains Maria Boyadjiiska, Deputy Mayor of Sofia.

From waste to compost material

A composting plant, in operation since March 2014, has the capacity to treat about 20,000 tons per year of bio-degradable waste from parks and gardens. This waste is then turned into good quality compost which is sold to farmers and residents. Up to 10 kg of compost is also given for free to residents of Sofia for their gardens, a measure that was met with enthusiasm.

When the facility reaches its maximum capacity, it will be producing 13,000 tons of compost and 30 tons of ammonium sulfate, a commonly used soil fertilizer. Bringing back nitrogen, phosphate (considered as scarce finite resource) and other minerals into the soil helps maintain a healthy environment.

From waste to energy

An anaerobic digestion plant operating since January 2014 processes some 24,000 tons of separately collected food and kitchen waste. This waste is then turned into energy used for own consumption and sold to the grid. At maximum capacity, the plant will produce over 855 KW/h of electricity.

A second life for recyclable materials

In order to collect recyclable materials, a separate waste collection scheme was implemented in two districts, Kupel and Kremikovtsi. Thanks to a well prepared awareness campaign, the residents played their part in sorting their waste. In 2014, some 64 tons of paper and cardboard, 73 tons of plastic and metals and 82 tons of glass were recovered and will find a second life in the economy. In the near future, the city plans to extend the separate waste collection scheme to other districts.

In addition, by the end of 2015, a Mechanical Biological Treatment (MBT) plant, currently under construction, will process mixed waste which it will separate into several outputs: compost, recyclable materials and alternative fuel. The MBT plant will be one of the largest in Europe with a capacity to treat 410,000 tons of waste per year. Thanks to the MBT plant, 40,000 tons of recyclable materials will be collected and reintroduced into the overall economy. Furthermore, the MBT plant will produce fuel that will be used for generating electricity and heat for parts of the city.

Bulgaria and the EIB

Bulgaria: Inauguration of the Sofia Waste Treatment Plant co-financed by the EIB

Today a new mechanical-biological treatment plant with a capacity of 410 000 tonnes of mixed ...