Education and health in Navarre get a boost

Education and health in Navarre get a boost 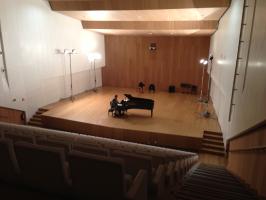 In 2008, the EUR 609 million “Plan Navarra 2012” co-financed by the EIB provided a much needed breath of fresh air for the region. In the fields of education, health and cultural heritage, thousands of jobs have been created and the 50 operational projects are giving a fresh boost to the economy of Navarre.

Navarre is one of the wealthiest regions in Spain; however, the economic and financial crisis has hit the region. The unemployment rate is 16% and though much lower than the Spanish average, it is still a great loss in terms of economic and human potential. To combat these negative indicators, the Government and the Parliament of the Autonomous Region of Navarre approved in April 2008 a EUR 609 million investment programme, which complements the 2007-2013 Operational Plan Navarra that was approved by the European Commission in November 2007 and co-financed by the European Regional Development Fund.

As part of this plan, the EIB has provided a total loan of EUR 300 million to finance projects in such diverse sectors as health, education, RDI, cultural heritage and the environment. All in all, 50 projects have been implemented on time despite the difficult economic situation and it is estimated that more than 5 000 jobs have been created.

EUR 180 million has been invested in infrastructure and equipment for the education sector in primary and secondary schools as well as universities and for vocational training. The new conservatory in Pamplona which opened its doors in September 2011 is one of the Plan’s main achievements and today welcomes over 800 students.

The conservatory is a member of the European Conservatories Association and welcomes Spanish and international students who can go there under the Erasmus mobility programme. Currently, it has signed cooperation agreements with universities in Germany, Finland, Holland, Italy and Poland.

The Biomedical Research Centre is one of the main projects co-financed by the EIB. Known until now as CIB, it was created in 1997 as a technical healthcare centre for the Health Service of Navarre. In October 2012, it was integrated into the structure of the Miguel Servet Foundation under the name NAVARRABIOMED, maintaining all of its functions. However, it is not just a change of name and affiliation. In its new building and with a strategic plan in motion, the Research Centre will be a benchmark in biomedical research in Navarre.

To this end, NAVARRABIOMED investigates molecular biology, cytogenetics, cell culture, immunohistochemistry and cell therapy in order to carry out research in the fields of haematology, oncology and neuroscience.

It has at its disposal a biobank of brains and another one of tumours, as well as technology platforms in proteomics and genomics, animal facilities and experimental surgery. In the new building, researchers will have three clean rooms and will expand and reinforce the previous lines of research, platforms and support units.

When someone comes through the doors of any hospital's emergency unit, they want to be seen quickly, treated quickly and go home quickly. That’s precisely the level of service that the new Navarra Hospital emergency unit for adults wants to deliver to its 100 000 patients. Inaugurated in October 2013, the new building handles the emergencies previously dealt with by Virgen del Camino and Navarra hospitals.

Communication between the various practitioners involved in the treatment of a patient has also improved thanks to the electronic transmission of health records for data sharing.

The new Accident and Emergency building in Navarra Hospital has four floors plus a basement. In addition, the rooftop serves as a heliport. The ground floor and part of the first floor are taken up by the Accident and Emergency Service, which will have almost three times the space as it moves from the current 700 square feet to over 3 000. In addition, the number of boxes is being doubled with respect to current levels, from 8 to 16, and the number of observation beds will, in turn, rise from 10 to 15. It has two radiology rooms, a TAC team (scanner) and an ultrasound device. In total, more than 300 professionals (33 more than in the previous hospitals) will treat an average of 307 patients a day.