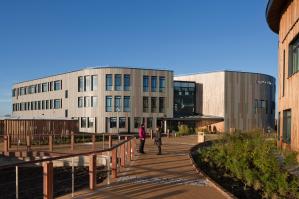 Based on a combination of public and private funding, including EUR 53 million support from the EIB (GBP 41,59 million), the University of York campus extension will eventually result in an increase in total student numbers to around 15,000 as well as creating 450 new jobs.

Opened on October 2010, the £200 million initial stage of the development at Heslington East has led to a major increase in research capability at York, already one of Britain's leading research institutions. York’s investment and focus on employability and the wider skills has indeed resulted in 9 out of 10 York students being employed or in further study just six months after graduating.

The new buildings achieved on time and budget provide accommodation for 620 students in Goodricke college and four departments – the Department of Theatre, Film & Television, the Department of Computer Science, the York Law School and the York Management School. The expansion also features two flagship buildings – the Ron Cooke Hub and the Catalyst – housing an integrated network of support for start-up and early-stage businesses. “The Hub has well over 1000 business visitors each year to events from private conferences, team away days and detailed scoping meetings with university researchers.  The majority of businesses attending the Hub engage actively with University groups” says Professor Koen Lamberts, Vice-Chancellor of the University while adding “The new facilities have enabled the university to increase student enrolments from 12,773 in 2009 to 15,253 in 2013 and helped to generate 450 full time jobs at a difficult time for the economy both locally and nationally. We are already one of York's largest employers, supporting around 6,000 jobs in the region and contributing more than £160 million per year to the local economy.”

The Computer Science move to a new building further improved the experience for students by providing more teaching rooms and computer labs. The £21 million complex now occupies a purpose-built lakeside building equipped with the latest software and hardware teaching laboratories and some of the most advanced research laboratories in the country. These include the Home Laboratory where new technology – particularly to support people with disabilities – is trialled in a real-life setting. It also provides space to support spin-out companies and entrepreneurship.

A special care for design and the environment

Heslington East boasts a variety of striking facades. The design brief has won a Royal Town Planning Institute award and helped York to be named University of the Year at the Times Higher Education Awards 2010.

Developed on sustainable principles (all of the buildings were constructed to BREEAM ‘very good’ standard), the campus expansion includes substantial green corridors, as well as a lake, new woodland and extensive areas of wetland, designed to increase the biodiversity of the area. Another environment friendly element is the installation of a biomass boiler to generate hot water using woodchip from sustainable sources.

The campus extension also includes recreational and cultural facilities that are available for use by the wider community. The extended campus is virtually car-free with a range of measures in place to reduce traffic movements around the campus. The University is working with the City of York Council and other partners to secure a substantial overall reduction in traffic in the area.

“We approached the EIB to help with funding of a major development project. Once they had grasped the nature of the project they were extremely helpful, making funds available on attractive terms and without pressing us to make inappropriate hedging arrangements, a problem we had had with some of the more conventional lenders. Overall, the experience has been positive and we would be happy to work with EIB on appropriate future projects,” concluded Professor Lamberts.

EIB and the education sector

Over the last five years the EIB has provided £1.5 billion for education investment in the UK. The Bank recognizes the long-term investment needs for universities and higher education institutions across the UK and over the coming years expects to be able to provide £200 million a year in new funding for the sector. Between 2008 and 2013 the Bank provided loans worth more than £17 billion to 201 education projects across Europe. 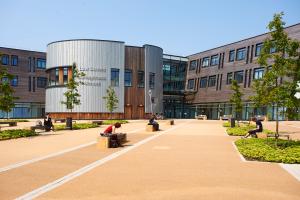 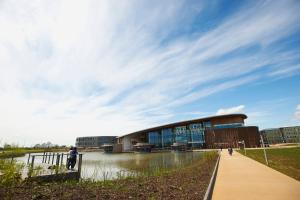