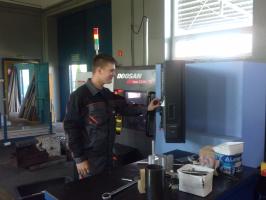 Europejski Fundusz Leasingowy GL
Intermediated loan for the financing of projects in the fields of industry, services or tourism in Poland promoted by SMEs, including micro-enterprises
ALSPAW
[Poland]

Youth unemployment is one of the main challenges facing Europe. Improving the performance of Europe’s young generations on the labour market is precisely what the EIB Group is trying to address through our “Skills and Jobs – Investing for Youth” programme. The first loan of this kind in Poland, EUR 50m to Europejski Fundusz Leasingowy S.A. (EFL) is already bearing fruit in the form of dozens of new jobs specifically dedicated to Polish youth.

Alspaw, a worldwide leader in the production of aluminium stage systems, has been able to recruit 18 young people with the help of financing of PLN 254,032 (EUR 60 000) via EFL. The company, based in central Poland, also invested in the purchase of new machinery to create independence from suppliers while improving product quality. When hiring new staff, the company’s owner decided to employ young people with a keen interest in and understanding of new technologies to get the best out of this important investment: “Over the past six months I have employed 18 people between 16 and 24 years old, including students whom I have taught the welding profession. Newly recruited people occupy various positions such as locksmiths, welders, drivers or even office workers”, said the company’s owner, Mr Krzysztof Michalak, proudly.

Onix, a fruit and vegetable processing company located north of the regional capital Poznan is another successful example of what the EIB can do to fight youth unemployment. Backed by a PLN 142,500 (EUR 33,750) investment from EFL, the company recruited and trained five full-time young people this year. “Onix enjoys a very good reputation on the market and our young team helps in building this image. We employ young people mainly in production as well as in the sales/procurement department”, said the President of the company, who is himself only 48 years old. Onix grows and exports vegetables and fruits all over Europe and cooperates with major supermarkets such as Lidl, Tesco, Leclerc or Intermarche. “At Onix, we think globally and act locally. Our 60 employees come mainly from neighbouring cities in order to maintain a proximity to the workplace”, he added.

Smay, a leading designer and producer of ventilation and air-conditioning devices in Europe has also benefitted from a PLN 88,113 (EUR 21 000) EFL financing last year which allowed it to offer apprenticeships and trainees to Cracow students. “Our company employs many trainees. We give students the chance to work in a real environment and develop concrete projects. It’s a win-win situation as trainees have the chance to show their potential while we benefit from unique ideas to place our company as a leader in the field”, stressed the CEO of Smay, Cracow. The majority of new domestic sky-scrapers (e.g. the Sky Tower in Wroclaw) use devices and patents produced by Smay. The company also sells its technologies to the EU and USA. Young people mostly work as designers, in logistics, process management and in fields linked to digitally controlled machines. At the moment, the company employs 241 employees of whom a dozen are under 30 and work on a permanent basis.

Further South, in southeastern Poland, Stek-Rol sp. Z o.o, a network of convenience stores created in 2003, employs 430 people, 11% of whom are under 24 years old. The network generates revenues of PLN 150m (EUR 35.5m) a year and employs young people mainly as sellers, cashiers-sellers, warehouse employees and shift managers. This year, the company concluded six lease agreements with EFL, including two agreements financed from EIB resources as part of the Jobs for Youth initiative. The company invested this in store furniture and refrigerating appliances for three newly opened stores. Since the beginning of the year, the company has been developing dynamically and created 30 permanent jobs, five for young people under 24 years old.