The Florence – Bologna motorway: a few world records along the way

Request a document
Other public registers

The Florence – Bologna motorway: a few world records along the way 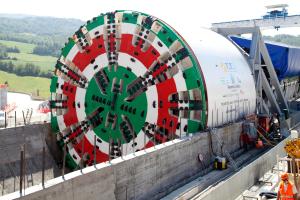 Crossing of the Italian Tuscan-Emilian Apennines between Florence and Bologna has always been a challenging task. Thanks to EUR 500 million of EIB financing, a new road between these two cities will improve traffic fluidity and road safety.

The A1 motorway between Florence and Bologna was built in the 1960s. It uses principles that were modern at that time but obsolete now, including sharp bends that make this stretch particularly dangerous to drive. Today, this section of the road has more than twice the traffic for which it was originally designed, and one of the highest accident rates in Italy with over 2000 incidents in the last decade.

A EUR 500 million EIB loan is helping Autostrade per l’Italia to increase the capacity of Italy’s main motorway on Corridor I of the trans-European transport networks. Once completed, in 2019, the new motorway will shorten the journey time from Bologna to Florence to less than 50 minutes. Today, it takes an hour and a half.

The new road will be part of an innovative and safer motorway system that can accommodate traffic volumes up to four times the current A1’s, with lower vertical gradients, steep curves and modern systems for traffic control and road safety. It will be located approximately 225m below the level of the existing A1 and will cross the heart of the mountains, passing through 44 tunnels and more than 40 viaducts and bridges.

A battle against the forces of nature

The new highway crosses one of the most complex geological areas in Europe, with land containing explosive gases as well as surface and ground water in an area with high seismic risk. The zone has also the highest risk of landslides in Italy. In these areas, the bridges will have foundations up to 30m deep. All the viaducts will be equipped with special seismic isolators to minimise structural movement in case of earthquakes. But the most challenging part of the project is the excavation of the tunnels and galleries.

Building the “Galleria Sparvo” will require the help of Martina, the biggest tunnel boring machine ever built in Europe. Bigger than a 5-floor building, longer than a football field and heavier than 9 Boeing 747 airplanes,  Martina can reach the remarkable speed of 22 m/day, compared to 80-90 cm/day for traditional excavation methods.

Yet the Sparvo is just one of the 44 galleries of the project and this record is not going to last long: a new tunnel will be built in the final section of the highway near Florence using the same technique: the 7.7 km long gallery “Santa Lucia”, three times longer than the Sparvo. 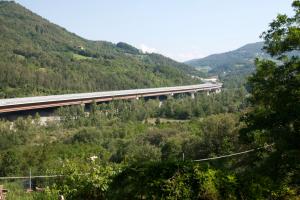 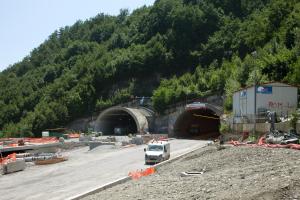 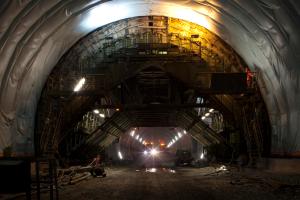