Request a document
Other public registers 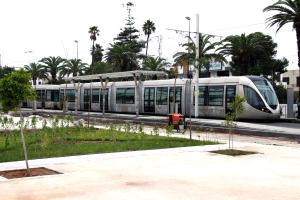 Tramway Rabat
Construction of two tramway lines with a total length of 20 km and 31 stations between Rabat and Salé
EIB
[Rabat, Morocco, Salé]

In the pipeline since 2010, the Rabat-Salé tramway marks a step forward in the quality of urban public transport in the Moroccan capital. Completed with a budget of over EUR 303 million, this project meets the daily transport requirements of 400 000 inhabitants between Rabat and its twin city Salé and is expected to transport some 180 000 passengers a day. Ultimately, 80% of the passengers are likely to comprise former bus and taxi users or pedestrians and a sizeable number of car users. With this in mind, three car parks have been built close to the terminus of the lines. The new tramway will also serve to accommodate the Rabat/Salé conurbation’s growth in population, which increased from 1 318 million in the census of 2004 to more than 2 million in 2010.

Two lines with a total length of 20 km and 31 stations are now in operation. They serve the conurbation’s key population and business hubs – the university district, hospitals, administrations, both city centres and the main bus and rail stations. They also represent the first step towards a larger tramway network expected to comprise four lines. The tramway works also required the construction of a large viaduct, the Hassan II bridge, which connects the twin cities. The bridge’s three tracks are situated 14 m above the level of the water. One track is exclusively for the tramway, pedestrians and cyclists and the other two are for cars.The socioeconomic impact of the project is estimated at 4 000 direct and indirect jobs during the construction phase and 1 000 jobs during the operation phase.

Further north, near the Algerian border, the city of Oujda inaugurated in June one of the largest wastewater treatment plants in Morocco. Designed for a population of some 530 000, it has a wastewater treatment capacity of 40 000 m a day, the equivalent of 14.6 million m3 of raw wastewater that used to be discharged each year into Oued Bounaim north of the city.

Built on a 60 hectare site, the plant is energy efficient and uses no chemicals thanks to a 100%-natural aerated lagoon process. This lagoon wastewater treatment process uses the sun’s ultraviolet rays for final disinfection of the water. The plant will also help to save water through the re-use of the treated wastewater to irrigate some 1 200 hectares of farmland.

In 2012, EIB financing in Morocco reached record levels.Loan agreements worth nearly EUR 1 billion were signed for 12 projects in a broad range of sectors including transport, energy and industry.