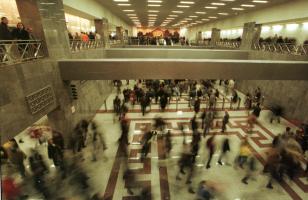 Athens Metro B
Extension of lines 2 and 3 of the Athens metro network
EIB
[Athens, Greece]

In 2004, during the summer Olympic Games in Athens, hundreds of thousands of people travelled on the brand new metro system co-financed by the EIB. More recently the EIB provided a further EUR 150 million for the metro's extension. Alltogether, the EIB will have co financed this true success story for a total of EUR 1.5 billion.

Athens is home to about four million people (40 per cent of the Greek population) and two million cars. Before the metro was built, the city was as famous for its traffic congestion and pollution as for its Parthenon.

Today, the Athens metro network is one of the most up-to-date in Europe and has been described as a monumental achievement. The metro currently carries 650 000 passengers a day, effectively taking 200 000 cars out of circulation. All in all, the 30 kilometre-long metro network facilitated the everyday life of 200 million passengers, while reducing traffic jams on the main roads and slashing commuting times from 40 minutes to 10.

It has also given a new life to the neighbourhoods located near the metro stations, which have been significantly upgraded. Most businesses in the vicinity of metro stations have benefited and real estate value has gone up. In addition, easier accessibility has made attractive some previously difficult to reach areas. In terms of employment, the extension of the Athens metro and the construction of another metro, in Thessaloniki in the north east of Greece planned by 2015 will create 1450 jobs.

Last but not least in a city full of archeological wonders, the building of the metro has led to new finds. A 4th century BC necropolis, the ruins of a 6th century BC aqueduct, and parts of an ancient Roman wall are just some of the 30 000 precious items that engineers, in collaboration with Ministry of Culture officials, had to contend with. The most significant archaeological excavations were performed during the first phase of the project's construction on the sites of four metro stations located in the historic heart of the city (Syntagma, Keramikos, Monastiraki and Akropoli). Some of the finds that were made, as well as artwork by contemporary Greek artists, can be admired in the metro stations today.