All athletes experience setbacks. But to have your limbs - the very tools you use to practice your sport - taken away by an illness at a young age is a setback that many would never overcome.

Bebe Vio never gave up her dream of becoming a fencer, despite having her arms and legs amputated when she was eleven years old after suffering from fulminant meningitis.

Instead of abandoning her dream of going to the Olympics, she began training for the Paralympics from a wheelchair. Her unwavering determination to win, despite her physical challenges, made her a world champion fencer. She also established her own association, art4sport, to encourage other people to pursue the beauty of life through sport.

This is the eighth essay in the Big Ideas series created by the European Investment Bank. 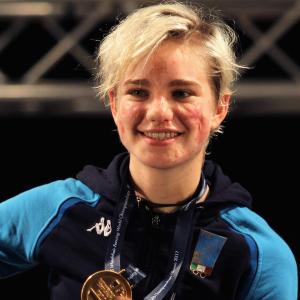 Bebe Vio was born in Venice on 4 March 1997. Since childhood, she has always been full of life and had lots of interests: school, drawing, scouting and above all fencing. When she was 11, a sudden attack of meningitis robbed her of her arms and legs.

But one of her greatest wishes was to be able to get back to sport, and she succeeded in doing so with the help of  art4sport ONLUS and a team of specialised technicians. Bebe became the first athlete in the art4sport team.

In early May 2010 Bebe contested her first official match in Bologna, and since then she has taken part in a growing number of ever more exciting and entertaining competitions.

In 2018 she again won the gold medal at the European paralympic fencing
championships.