The Women’s Solutions Reporting Award by One Word Media, and partnered with the EIB, shows how women’s solutions stories can contribute to a more inclusive world

Activist and journalist Caroline Criado Perez says, we live in a world designed by men, for men.

I believe that if we want to change the world and make it more inclusive, we need to redesign it so that all people thrive equality. Art, culture and media can show us the way. Journalists and filmmakers, in particular, have the ability to present the world as it is now—and as it could be in the future.

That’s why I am very proud that the European Investment Bank is supporting the Women’s Solutions Reporting Award with One World Media.

From Iran to the EU bank

My parents left Iran in the 1960s in search of a better life. Thanks to them, I had access to inspiring opportunities and role models—things I may not have had, otherwise.

It might be because of my background that, even in my business career, I’ve always been attracted to innovation and creating growth.

In my current role at the EU bank, I want to help people bring new ideas to life. For example, after setting up financing schemes for entrepreneurs, we discovered that many weren’t yet investment-ready and needed additional support.

This led to the creation of the Innovation Finance Advisory division, which I had the privilege to set up and scale up, until it became a key pillar of the Bank’s advisory services. We also advised entrepreneurs who wouldn’t think of seeking our financing, but who were working on exciting solutions.

What caught my attention in that role was that very few of our clients were women entrepreneurs. This prompted us actively to look for them, to tell them about the type of support we offer and the kind of financial instruments they have at their disposal. They couldn’t look for something they don’t know about, after all.

Three years ago, the Euroopean Investment Bank launched the SheInvest initiative to mobilise €1 billion in investments that help women get loans and run businesses across Africa. At the end of 2022, at the Finance in Common Summit, we extended our initiative to mobilise another €2 billion of gender-lens investment in Africa, Asia and Latin America.

To help women obtain financial support, we designed an EIB Group Strategy and a Gender Action Plan. We are also part of the 2X Challenge and adopted its criteria, which  sets global standards for empowering women through investment.

Women still earn around 25% less than men. Nearly a billion women can’t get loans to start a business and they can’t open a bank account to save money.

Advancing women’s equality in banking and the workplace could add as much as $28 trillion to the global economy by 2025.

I hope that one day, when we live in a truly equal world, such initiatives won’t be needed anymore.

The road to equality starts with seeing women’s stories in the media—the kind we’re trying to highlight with the Women’s Solutions Reporting Award.

It’s an important step so women everywhere are reminded that where you come from doesn’t determine how far you go. 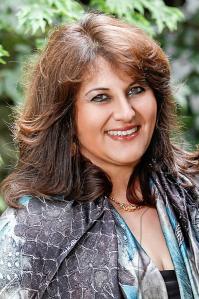 Shiva Dustdar is the director and head of the European Investment Bank Institute, the first woman to lead this arm of the EIB Group. She is a regular speaker on innovation and impact financing, gender-smart investing, digital and green financing.