An EU-Moldova agriculture programme helps farmers modernise vegetable production, export to the EU and cope with the COVID-19 pandemic

Moldova’s agricultural sector has traditionally focused on fruit. Two companies, Sandunelu and Europlant, saw the opportunity to expand the vegetable market, but they needed financing. When they got it from the Fruit Garden of Moldova programme, it allowed them to boost their business—and put them in a good position to ride out the COVID-19 crisis.

The capital needed to expand production and buy equipment for bulk washing, sorting, packing, labelling and storing vegetables is beyond the reach of small businesses that lack collateral for a loan. As small agricultural growers, Sandunelu and Europlant benefited from the European Investment Bank programme, which finances local companies through intermediary banks in Moldova to the tune of €120 million.

With their processing facilities modernised, Sandunelu and Europlant were in a good position to weather the COVID-19 pandemic. As street markets were closed across Moldova during the pandemic, customers showed a strong preference for packed vegetables to lessen the risk of virus transmission. Both companies’ sales increased considerably during the pandemic, because they could meet demand with advanced technology for sorting and packing as well as enough storage capacity for vegetables. Workers could also distance safely from each other, which would have been impossible with older equipment.

“The Fruit Garden of Moldova is a success story,” says Luca Ponzellini, who was part of the team at the European Investment Bank that developed and has been following the programme.

Agriculture plays a central role in the Moldovan economy. The Fruit Garden of Moldova project has supported small and medium-sized businesses to engage better in the very competitive and narrow Moldovan market and helped them diversify their export destinations. Thanks to the EIB’s technical assistance package, the project’s business advisors have been leading farmers, as well as all players along the horticulture value chain (all the activities needed to create a product), by the hand through the entire loan application process. Ranging from optimising how to present their remittances and collateral to negotiating the loan with the intermediary banks. “I’ve never worked in a project in which we could generate more investment into food and agriculture by small businesses than with the Fruit Garden of Moldova”, says Christoph Arndt, who led the team giving business advice for the project. “And the amount of produce sold to the EU this year has grown enormously, despite the pandemic and drought”.

Sandunelu, which grows carrots, onions and beetroots, received €492 000 from Mobiasbanca backed by the European Investment Bank. The company also benefitted from business advisory support that helped prepare the paperwork for the loan. Onion and potato grower Europlant got €720,000 from the EU bank through ProCredit Bank for the construction of a warehouse near Chisinau, Moldova’s capital.

Moldova’s climate and soils is ideal for growing fruit and vegetables. The country is one of the top ten worldwide exporters of apples and is famous for its grapes and walnuts. But the long-term focus on fruit meant that vegetables were often imported.

Sandunelu and Europlant spotted the gap in the market for homegrown vegetables. They grew their produce for Moldovan supermarkets and the hotel, restaurant and catering sector. But the relatively small amounts cultivated by these two family-run companies made it difficult for them to develop their businesses. Sandunelu started with only two hectares under production, before expanding to 50.

"We were inspired by several producers we visited in Ukraine. At first, it seemed strange to us when they said that the vegetable business is profitable, but then we decided to try,” says Ion Cojocaru, whose father founded Sandunelu. “We produced small quantities of onions, carrots and beetroots, which did not allow us to establish relationships with supermarket chains in the country. Therefore, we decided to gradually increase our area under production."

But growing more vegetables was not enough to make the businesses grow. As well as increasing the amount of produce, they had to modernise. Big buyers want fresh produce that is sorted for quality and size, as well as washed, weighed, packaged, labelled and, finally, prepared for delivery. Prospective buyers also ask for a year-round supply of packed vegetables, so the companies needed storage facilities for bigger stocks.

“In the beginning, we packed the vegetables manually into 1.5, 2 or 5 kg packages,” says Cojocaru. “But this meant very high costs and we tried to identify alternatives.”

The results show in the record of individual companies, too. Sandunelu now supplies about 60% of all onions and carrots sold through supermarkets in Moldova.

The Fruit Garden of Moldova programme supports the Moldovan horticulture sector, which is almost exclusively made up of small and medium-sized businesses. The programme is part of the European Union’s support for Moldova and aims to boost trade and economic growth, including agriculture and rural development. The Association Agreement signed in 2014 by Moldova and the European Union and contains the Deep and Comprehensive Free Trade Area (DCFTA) agreement, which has been laying the groundwork to facilitate the country’s access to the EU market for its products and services. The DCFTA foresees that Moldova, over the course of ten years, will pass under local legislation hundreds of EU Directives and regulations, with a view to becoming fully aligned to EU standards. While most of the benefits will be visible once the process is completed, already between 2014 and 2016 sales of preserved vegetables to the European Union increased by 455%, while exports of Moldovan preserved fruits and nuts more than doubled and chestnut sales almost tripled. Between 2015 and 2019, the share of Moldova’s exports going to Europe rose to 68% from around 50%.

The Fruit Garden of Moldova programme is helping develop Moldova’s horticulture value chain. The €120 million programme focusses on horticulture to improve the quality of fresh and processed produce from the fields to delivery. It follows the same structure and approach of an earlier European Investment Bank-funded project in Moldova aiming to modernise the wine sector.

These developments will create more and better-paid jobs in rural areas, with less migration out of Moldova. There are benefits for consumers, too, through safer, better quality, locally grown agricultural products, as well as lower prices.

This year has been very difficult for producers in Moldova, as they suffered an immense drought in 2020, as well as the pandemic. In a normal year, there are 552 mm of precipitation, but there were only 218 mm between September 2019 and August 2020.

“The COVID-19 pandemic led to a major economic shock and has a significant negative impact on the agriculture and horticulture sector in Moldova,” says Sebastien Collot, an engineer in the EIB’s agribusiness division.

COVID-19 made it harder for farmers to get their produce to market while it was fresh. There were restrictions on exports and access to street markets. “Thanks to the support of the technical assistance and the project implementation unit, beneficiaries of the Garden of Moldova programme experienced fewer delays and had new opportunities with product diversification,” Collot adds.

The EU invests in modernising agriculture to improve food safety and quality, and its support helps Moldova align with EU trade-related laws and regulations, integrating it with the EU single market. The Fruit Garden Moldova programme funds production systems for packaging and labelling vegetables, which means that Moldovan farmers can follow EU standards, penetrate new markets and be more competitive.

Radu Grosu started Europlant, a family-owned business. As well as receiving funding from the Garden of Moldova, he benefitted from a European Investment Bank credit guarantee for 50% of his loan. Under the InnovFin programme, this guarantee covers loans of innovative small businesses at no extra costs to the borrower.

The company has engaged with smaller growers too, who use Europlant’s packing facility. Its Chisinau packing station has become an important distribution centre in Moldova—a catalytic effect that reaches beyond the companies receiving the direct EIB investment.

With the arrival of COVID-19, these investments came to fruition just in time. 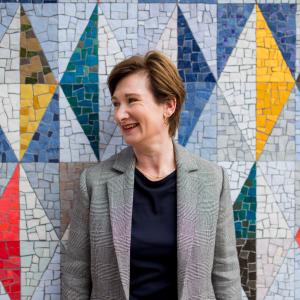 Ukraine trade disruptions and inflation weigh on firms and households, threatening to derail Europe’s recovery and push many into poverty

More partnerships and investment are needed to improve low levels of developing world vaccinations and fight future diseases. Here’s how the EU bank is working to create vaccine-manufacturing facilities in Africa and to vaccinate other regions of the world

A Greece Cyprus digital insurance company is pioneering a new platform to bring faster, cheaper, and more accessible insurance services to the region