Besides continuing our support for reconstruction and upgrading of public infrastructure, since 2010, the EIB has expanded its work in the Western Balkans into many new areas, such as health care, education and research and development.

One of Europe’s most beautiful railways recaptures past glory

Montenegro's railway was the largest and most expensive infrastructure project in the former Yugoslav federation. But now it has fallen into decay. With the European Investment Bank's help, the railway plans a comeback.

Back in January 1986, Ilija Pavlickovski took out a lease on a small bakery in Šuto Orizari, the second-smallest municipality of Skopje. An EIB-funded loan helped his bakery grow and diversify. His company has now become a nationally recognised brand.

A flood of investment for Bosnia and Herzegovina

The heaviest rain in recorded history hit southeastern Europe in May 2014. Serbia and Bosnia and Herzegovina suffered most.

Cooperation with other institutions

The EIB co-finances major projects in the region with other International Financial Institutions, particularly the European Bank for Reconstruction and Development (EBRD), the World Bank and the Council of Europe Development Bank, as well as with bilateral donors.

Since 2009, the EIB, the European Commission, the Council of Europe Development Bank and the European Bank for Reconstruction and Development have been cooperating under the Western Balkans Investment Framework (WBIF). This provides a joint grant facility and a joint lending facility for priority investments in the region. The objective is to simplify access to credit by pooling and coordinating different sources of finance and technical assistance, with a focus on infrastructure sectors, including social infrastructure.

A further joint initiative, with the same partners and the European Investment Fund (EIF), is the Western Balkans Enterprise Development and Innovation Facility (WB EDIF), launched in December 2012. This aims to improve access to finance for SMEs in the region, helping to develop the local economy and regional venture capital markets, while promoting policy reforms to support access to finance through financial engineering instruments. The initial capital of the WB EDIF was EUR 145 million, which will effectively translate into over EUR 300 million of direct financing for high growth and innovative SMEs in the Western Balkans.

Regional Office for the Western Balkans

The European Investment Bank in the Western Balkans 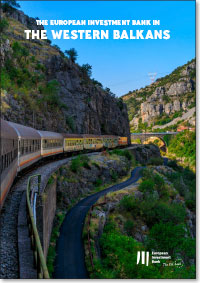 As the leading international lending bank in the Western Balkans for the past 30 years, the EIB has helped the region upgrade transport and energy sectors while improving health care and education for everyone.

Launched in 2016, ERI is part of the European Union’s response to the challenges in the ...