The EIB is entrusted with the management of the Investment Facility, a revolving fund where revenue is reinvested in new operations, which makes it a financially sustainable facility. The Investment Facility meets the financing needs of investment projects in the region with a broad range of flexible risk-bearing instruments. It is funded from the resources of the EU Member States.

The Investment Facility adds further value to operations financed by the EIB through the provision of grants for financing interest rate subsidies as well as project-related technical assistance. Examples of projects that made or are making use of IF funding are the Lake Turkana wind farm (a public private partnership also featuring a blending component from the European Union), the majority of global loans and credit lines to ACP financial institutions. It has also been used to support the construction of transport and healthcare infrastructure.

The EIB also invests in higher risk projects through a separate window of the Investment Facility, the Impact Financing Envelope. This allows the EIB to go further than the traditional operations, and explore new sectors and new regions, supporting private sector initiatives with a big impact for poorer populations.

Launched as a EUR 500m envelope, the Impact Financing Envelope has been expanded to EUR 800m by turning it into a revolving fund too. This will target projects which tackle the root causes of migration, as part of the ACP Migration Package. Good examples of Impact Financing Envelope projects are our investments in the Compagnie Agricole de Saint Louis and Boost Africa.

The Investment Facility Committee was set up in 2002. This convenes regularly to discuss and deliver an opinion on financing proposals (from Investment Facility resources and the Bank’s own resources) under the Cotonou Agreement and the Overseas Association Decision, prior to their submission for the EIB Board of Directors’ approval.

The meetings are chaired by a Member State representative elected for a period of two years.

Annual Report 2018 on EIB activity in Africa, the Caribbean and Pacific, and the overseas territories 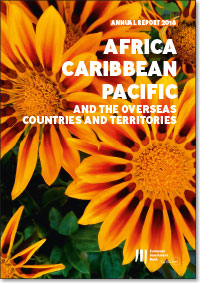 The EIB report on Africa, the Caribbean and the Pacific explains how developing countries have different needs that require different solutions.