Above left, a school in Volnovakha in southeastern Ukraine being renovated under a European Investment Bank loan. The site, right, was destroyed in recent fighting in the Donetsk region.

Friendly people and growing businesses. Busy bars and restaurants. Good roads. Clean schools and hospitals. This is how I used to experience eastern Ukraine. There were still problems, but most residents seemed happy.

This changed quickly after Russia annexed the Crimean Peninsula and occupied two large parts of eastern Ukraine in 2014 —Donetsk and Luhansk. By 2015, parts of the east became a rough place. When I first visited in 2015, the area was depressing. The people were unhappy, with poor social and urban infrastructure. There was nothing for people to do. It was heart-breaking.

We have no idea how the current war in Ukraine will end, but it’s important to prepare our responses and review previous work. The assistance from the European Investment Bank and the European Union over the past half a decade changed a lot of minds permanently in Ukraine. We are now welcomed as partners who want to build a better future.

After the occupation in 2014 and the battles in the east, large numbers of people moved west to escape fighting. More than a million people sought new homes. Today, Ukrainians by the millions are leaving the country. But that wasn’t the case eight years ago. They were moving mostly inside the country. There was a lot of work to do in the towns flooded with new people and in the areas of the east destroyed by fighting. This huge movement strained many Ukrainian towns. In some places, populations doubled. Thousands of social and urban services needed to be repaired or improved.

The European Investment Bank approved a €200 million loan in late 2014 to assist people who fled the conflict and the towns that accepted new populations. The loan was designed to help almost any public project essential for daily life. Heating systems were popular proposals. Many parts of Ukraine use district heating, so if a shell hits a heating pipe, that wipes out heating for a large area. In schools, hospitals and other public buildings, we installed individual boilers burning wood and other organic matter that could be collected locally. These systems could not be knocked out easily.

When I toured parts of the east in December 2015 to review these projects, the amount of work to be done was huge. I saw hospital emergency staff doing operations in fur coats because the heating had been damaged. There was no glass to protect the operating room from the elements. There was mould on the operating room walls. Tiles were cracked. The temperature was minus 20. It was atrocious. It reminded me of a “Mad Max” world apocalypse type of film set in a landscape of abandoned coal mines, derelict factories and bombed-out towns and bridges. Many people involved in the conflict in these towns were volunteers for the military, wearing civilian or partial military uniforms. They drove strange sorts of cars and vehicles that had been painted with camouflage to use as army vehicles. There were checkpoints outside every town asking for papers, shelling going on at night — with daily tank battles and machine gun fire along the “contact line.” The roads were poor, there were no restaurants. People were in desperate conditions.

We repaired more than 90 hospitals, medical facilities and a large number of educational sites. Some of my happiest visits were to renovated schools. More than 700 schools needed repairs in the Donbas area of the east. Many schools and kindergartens had windows blown out by fighting. Our loans insulated school walls, added windows and doors, replaced roofs and electrical wiring, repaired water pipes, installed fire sprinkler systems, added equipment and furniture. We restored libraries and fixed women’s centres, shelters and sports facilities. One sports centre had more than 600 athletes, including a teenage girl who recently won an international championship in karate in Dublin. We replaced overhead cables and gantries for a tram system that was bullet riddled. We approved projects as small as €20,000 and as big as €5 million.

Many of these projects have been bombed and damaged again in recent fighting. Two schools we were renovating in Volnovakha, in the Donetsk area, were levelled. More than 100 of our projects have been damaged in the areas where Russian forces are in control. We had rebuilt 17 buildings (hospitals, kindergartens, schools) in Mariupol, a town that has been mostly destroyed.

Before Russia invaded Ukraine in February, we had approved a second recovery loan worth €340 million and received about 900 new project proposals. Many projects were related to rehabilitation, but the new need will be rebuilding. We will have to start over from scratch on many schools, hospitals, town halls, libraries, heating systems and water treatment plants.

Sickened by the destruction

I saw big changes in peoples’ attitudes while I lived and worked in the country, especially in the east. The European Investment Bank built the trust of the local mayors and governors, because people saw that when we sign onto a project, we start quickly and we finish it.

When we first started working in the east in 2015, up to 70% of the people in some of the areas might have been pro-Russian and negative about Ukraine and the European Union. Pro-Russian support has fallen to about 30% over the past few years. People could clearly see Russia wasn’t investing a lot in the occupied areas. Today, Russian support is still falling in these communities. The people are sickened by the destruction and loss of life caused by the current conflict.

More important than our work is the perception of us — what the local people think about Europe and the assistance we provide. That is what has changed dramatically and what will last after this conflict ends. We can always rebuild, but it takes a long time to get local people to support and understand us. We achieved this and are ready to build on it at any time. 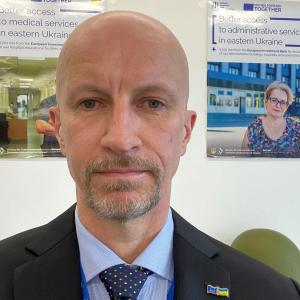 Roy Draycott, a senior civil engineer at the European Investment Bank since 2015, worked in the Kyiv office for six years while supervising projects around Ukraine.