For the second year, the EIB group calculated its carbon footprint. This report includes the calculation both for EIB and EIF emissions. The report demonstrates that climate change issues are increasingly taking a central role for the EIB group and that it commits to “walks the talk” by managing its emissions and offsetting the residual ones.

The items quantified in this study include all scopes 1 and 2 emissions: internal consumption, heating and electricity production, sourced electricity and heating and some of scope 3: employees commuting to and from work, employees' business travels, paper consumption and disposal of waste generated.

Within these emissions' boundary, the results obtained show that the total carbon footprint of the EIB and EIF comes to 19,653 tonnes of Carbon Dioxide equivalent (tCO2 eq) per year.

This carbon report, prepared by CO2logic is divided into two parts. The first part provides an analysis of the CO2 emissions emitted by the organisations for the Fiscal Year (FY) 2008. The final part investigates the EIB’s exposure to a carbon tax or a cap and trade system. 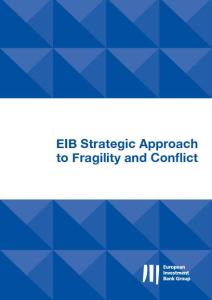 The European Investment Bank adopted its first Strategic Approach to Fragility and Conflict. It outlines the bank’s vision and approach to working in fragile and conflict affected contexts, with the aim to enhance EIB’s development impact.

This report summarises results from an intensive study on the impact of investment. The study was done in cooperation with the Global Development Network.