After the manufacturing and construction industries, tourism is the largest contributor to the European Union’s GDP.

In rural areas, the restoration of cultural and natural heritage contributes to growth based on sustainability and the green transformation.

The survival of Venice and its lagoon cannot be viewed as just a Venetian problem or an Italian issue. 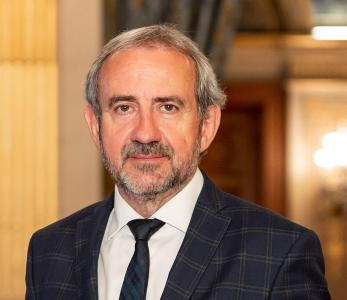 Prof. Dr Hermann Parzinger (born 1959 in Munich, Germany) is an archaeologist, historian and cultural heritage expert who, since 2008, has been the President of the Stiftung Preussischer Kulturbesitz (Prussian Cultural Heritage Foundation), one of the world’s largest cultural institutions including museums, libraries, archives and research institutes. He studied Prehistoric Archaeology and History and holds a PhD from the Ludwig-Maximilians-Universität in Munich. From 2003 to 2008, he was President of the Deutsches Archäologisches Institut (German Archaeological Institute), and from 2015 to 2018, the Founding Director of the Humboldt Forum, Berlin. Since 1996, he has been teaching at the Freie Universität Berlin. In 2018, he was appointed, in a voluntary capacity, Executive President of Europa Nostra, a pan-European federation for cultural heritage that represents civil society organisations seeking to safeguard Europe’s cultural and natural heritage. He is also active on the Board of the Stiftung Berliner Philharmoniker; the Convention of Baukultur of the Federal Foundation of Baukultur; the Founding Directorate of the Humboldt Forum, Berlin; the Research Board of the Austrian Academy of Sciences; the Conseil International du Musée des Civilisations de l’Europe et de la Méditerranée (MuCEM), Marseille; the Senate of the Deutsche Nationalstiftung; and the International Advisory Board of the State Hermitage Museum, St. Petersburg. He has led archaeological field projects in Spain, Turkey, Siberia, Mongolia, Kazakhstan, Uzbekistan, Tajikistan and Iran and is still actively pursuing research activities. He is a member of Academies of Sciences in Germany, Great Britain, Spain, Russia, Romania, China and the United States, and has received multiple awards, medals and other academic honours in Germany, Italy, Russia and Spain. He regularly publishes on a wide variety of subject areas, including archaeology, history, cultural heritage and cultural and academic policy issues.

European assistance in Ukraine over the past half a decade changed a lot of minds permanently. A civil engineer who helped build the country is ready to do it again