The workshop was an opportunity for civil society organisations and the EIB Group to engage with each other in a constructive dialogue and to learn from their respective expertise and practices.

During the first session dedicated to microfinance in Europe, the EIB Group explained how it is providing a global response to microfinance institutions’ needs by complementing financial services with technical assistance. Such a service mix strengthens these institutions ability to achieve efficiently their aim to support their borrowers towards professional inclusion.

This positive impact was confirmed by Patrick Sapy (microStart, Belgium) who described the positive outcomes of microfinance (both for the borrowers who are able to start an economic activity and for the State due to significant savings and increased incomes) without shying away from underlining the challenges in reaching out to the remaining unserved demand. Before opening the floor to questions, Joan Arrias’ passionate and vibrant speech illustrated how a microloan of only €1,000 could transform someone’s life. The loan not only helped her escape poverty but it also allowed her to use her professional skills to improve the well-being of others. 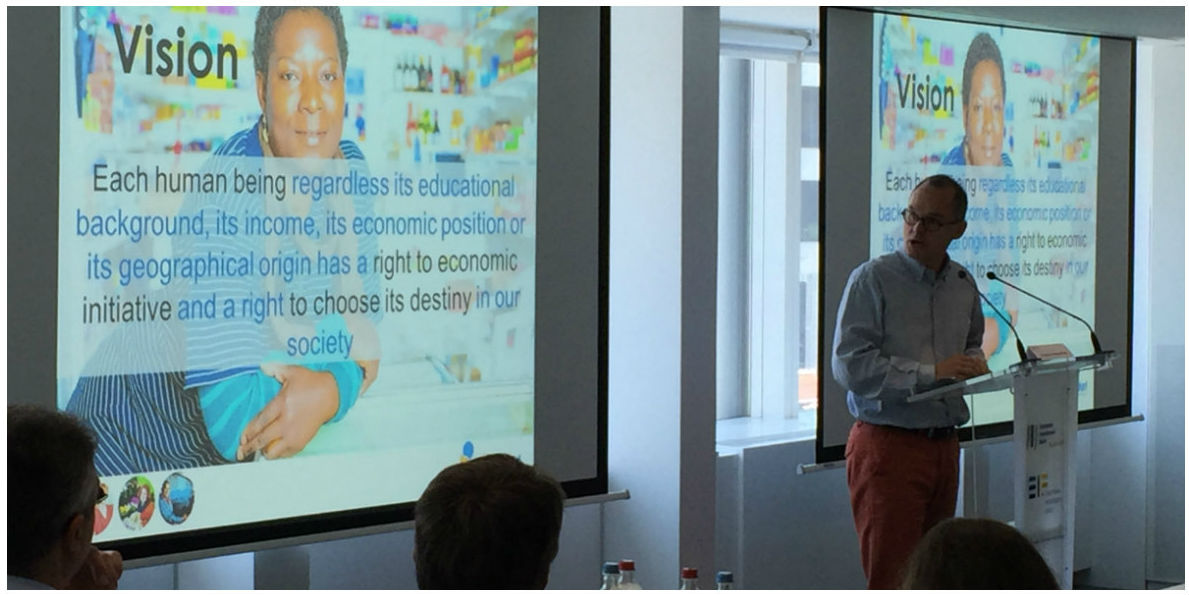 Many questions were raised by participants, namely how could microfinance be accessible to people with disabilities, could financial instruments, other than loans or equity, be more appropriate to the needs of micro-entrepreneurs, or how the mentoring of micro-borrowers could be financed.

The second session presented the Social Impact Accelerator, which provides financial support to SMEs with strong social impact potential, followed by the “Skills and Jobs – Investing for Youth” programme. The potential for social finance to address market failures was underlined, but it was also made clear that such programmes, to be successful, required time and the development of a common language and understanding of the issues between financiers and civil society organisations.

The justification for the EIB Group to focus on youth was explained by the fact that one year of unemployment for a young person will result in a 10% lower income for the rest of that person’s life.  It is therefore essential to support companies employing young people particularly in countries with very high levels of unemployment.

Numerous questions concluded this session and focused mainly on the evaluation of the impact of these programmes (i.e. quality of the jobs created) as well as on their eligibility criteria (e.g. allowing organisations relying on grants to access EIB Group funds). The debate provided an opportunity to highlight the EIB Group’s willingness to innovate (i.e. social impact bonds, social incubators, etc.) as well as the areas where increased engagement with civil society organisations would prove particularly fruitful.

The subsequent exchanges between EIB Group staff and participants during the networking lunch made it clear that engaging with civil society organisations is a prerequisite for EIB Group to better understand the needs of people directly impacted by its financial instruments and better tailor them to the needs of the real market.

The presentations can be found here.

The programme is available here.

The InvestEU programme is a key pillar of the European Union’s largest ever stimulus package to recover from the COVID-19 pandemic and to help build green, digital and fair European economy. It can also support the European economy in addressing new challenges arising from major uncertainties linked to the global and security outlook.

In October 2021, the EIB Board of Directors approved a new framework for the EIB’s cohesion action for the period 2021-2027. The new Cohesion Orientation lays the foundation for increasing climate action and environmental lending in poorer regions, fostering innovation and financing for the private sector and ensuring that EIB financing complements EU cohesion policy funds in the new seven-year EU budget.