Together on forced displacement and migration

Together on forced displacement and migration

Forced displacement is an important global development challenge. As the world attempts to tackle this issue it is essential to combine short term humanitarian interventions with medium and long term efforts to ease the burden on community services and social infrastructure, whilst addressing the root causes of forced displacement and creating economic resilience in both host and origin countries.

As the EU bank, the EIB is committed to working together with partners to help define and deliver an effective response to the global forced displacement crisis and further strengthen economic development contributions. This is being achieved by:

At the request of the European Council, we are developing a specific initiative to support economic resilience in the EU’s Southern Neighbourhood and the Western Balkans regions, both of which have been significantly impacted by the refugee crisis on the EU’s doorstep.

The influx of refugees into European Union over the past year presents one of the greatest challenges ever faced by the European Union. Political instability and conflict in the EU’s neighbouring countries are driving this mass movement of people. The need for action with immediate impact is clear.

While the solution to the root causes of the crisis will ultimately be found around the negotiating table, there is in the meantime a role and a responsibility for those of us committed to furthering peace and prosperity in Europe and its neighbourhood to confront the challenges. The current refugee crisis is a reminder of the interconnectedness of development issues, not only with geopolitics, but also with growth and investment policies in every country.

As the EU’s bank and the largest IFI lender for projects in the pre-accession and MENA regions, the EIB is committed to assisting EU Member States in addressing the refugee crisis in host countries, transit countries and countries of origin. Our experience of more than three decades in the region means we are best placed to deliver financing as part of the EU response.

“When people can look forward to a dignified and peaceful life in their own countries and are protected from conflicts and natural disasters, they have every incentive to build their future where they really feel at home.”
Werner Hoyer, EIB President. 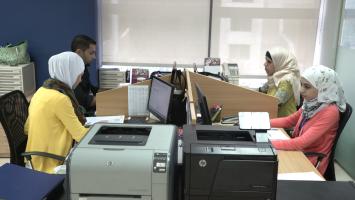 Microfund for Women
The European Investment Bank (EIB) is helping to create opportunities in countries in North Africa and the Middle East by backing entrepreneurship and microenterprises – particularly among women, and young people. This, and investment in key infrastructure is helping to support “economic resilience” in countries hosting numbers of refugees. By supporting the Microfund for Women (MFW), the EIB is throwing its weight behind a highly successful initiative for low income women in Jordan helping to build a sustainable future in the region.
[Jordan]

20 principles on entrepreneurship, employment, investment and products and services, which serve as a guide to mobilise private sector’s investment in support of refugees and their host populations. 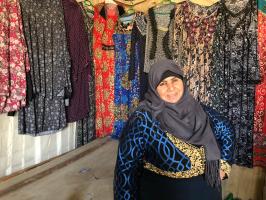 UN Summit for Refugees and Migrants

More on the event

On the occasion of the Supporting Syria & The Region London 2016 Conference EIB Group President ...

The first EIB backed microfinance operation in Jordan for EIB, made possible by EU grants. The ...

EIB supported SiliconBadia is providing loans and advisory services to tech and youth start-ups in ...

Investments in programmes designed to keep Syrian refugees close to their homeland—and help ...

Migration and the EU: Challenges, opportunities, the role of EIB 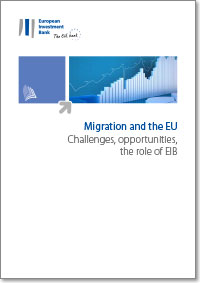 This study analyses the short and long-term impacts of migration in the light of the large influx of asylum seekers registered in 2014-2015, contributing to the debate on the issue of migration both in Europe and beyond.