The 2022-2023 EIB Climate Survey explores people’s views on climate change in a rapidly changing world. The results from this release focus on citizens’ views surrounding the impacts of the war in Ukraine and the recent rise in energy prices.

Explore the results from this release of the Climate Survey.

While COVID-19 was considered the number one challenge facing EU, British and American citizens last year, economic issues now dominate their concerns. The increased cost of living and widespread economic and financial issues top the list in the European Union, the United Kingdom and the United States. In China, the coronavirus pandemic remains the number one concern of the population.

A large majority of people surveyed in the European Union and China say they feel the effects of climate change on their daily lives (80% and 91%, respectively). Meanwhile, this perception is less pronounced among Americans (67%) and British people (65%).

84% of EU respondents say that if we do not drastically reduce our consumption of energy and goods in the coming years, we will be heading for a global catastrophe (vs. 88% of Chinese respondents, 83% of British respondents and 72% of American respondents). Meanwhile, 87% of people surveyed in the European Union and 85% in the United Kingdom feel that their government has been too slow to act in averting climate change, an opinion that is slightly less prevalent in China (76%) and the United States (74%). Only a minority of British, EU and American respondents think that their governments will succeed in substantially reducing their carbon emissions by 2030 (30%, 36% and 45%, respectively). Chinese respondents seem much more confident, with 91% saying their government will succeed in doing so.

War in Ukraine and green transition

Most EU (66%), British (62%) and Chinese (60%) respondents believe that the war in Ukraine and its consequences on the price of oil and gas should accelerate the green transition. Americans are split: a narrow majority (52%) agrees, while 48% view the war as a reason to actually slow down the green transition. 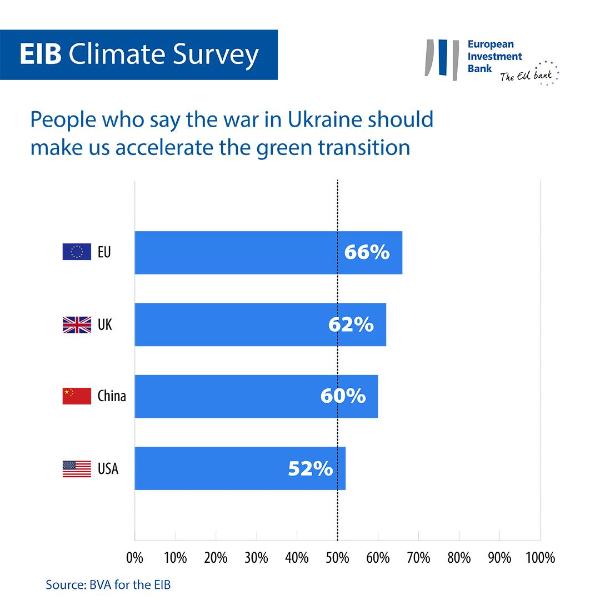 When asked to rank their priorities on energy, nearly half of people surveyed in the European Union (47%) and in the United Kingdom (45%) want their government to prioritise the development of renewable energies (vs. 37% in both the United States and China). According to Chinese respondents (46%), the priority should be to diversify energy suppliers (vs. 34% in the European Union, 35% in the United Kingdom and 39% in the United States). Among American respondents, support for the two options of diversifying energy suppliers (39%) and developing renewable energies (37%) is more balanced.

Energy savings comes in third position, with 24% of Americans surveyed saying that individuals and companies must do more to reduce their own consumption (vs. 20% in the United Kingdom, 19% in the European Union and 17% in China). 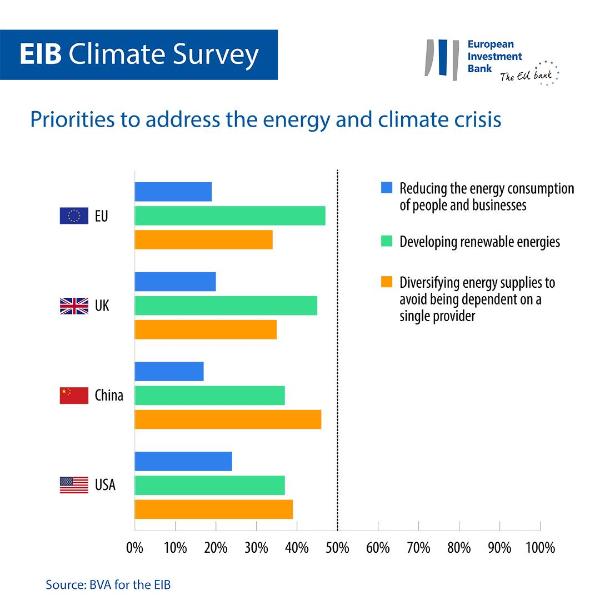 Finally, on addressing high energy prices, 40% of EU respondents think that in the short term, the government should first reduce energy-related taxes (vs. 29% in the United Kingdom, 24% in China and 23% in the United States). Other measures, such as capping or regulating the price of gas, oil and coal, are more favoured by British, Chinese and American respondents (46%, 38% and 29%, respectively) than EU respondents (28%).

“The results of the EIB 2022 Climate Survey show that, for people around the world, the crisis is also an opportunity to accelerate the transition of our economies towards a low-carbon and climate-resilient future. At the EIB, we have been supporting innovative clean energy investments for many years. As part of our transformation into the EU climate bank, we stand ready to continue using our full range of financial and advisory instruments to support the acceleration of our partners’ green transition efforts, including through the implementation of the REPowerEU plan, while making sure we leave no people or place behind.”

Explore results from the following countries

Curious about the survey methodology? Want to download the infographics? Explore the data and find more information on the 2022-2023 survey.