Some dates and figures

Some dates and figures

Since its establishment in 1958 the EU bank has invested over a trillion euros.

The EIB Group’s investments in 2018 will have a considerable impact on Europe’s economy, adding 1 million jobs by 2022.

How we have grown

Our HQ: Founded in Brussels in 1958 as the Treaty of Rome comes into force, we moved to Luxembourg in 1968. We relocated to our current site in 1980 with a major new building extension completed in 2008.

Partner countries: We made our first agreements with non-Member States and non-European countries in the early 1960s. Now we work with over 150 non-EU states which receive around 10% of our funding.

European Investment Fund: The EIF was founded in 1994 to specialise in SME and venture capital investment. The EIB is the majority shareholder supported by the European Commission and private banks.

Our people: From a workforce of 66 in 1958, we passed 1 000 staff members in 1999, and the total is now over 2 900. Most work in Luxembourg, but we also have external offices, in the European Union and across the regions in which we are active around the world.

The European Investment Bank shares a common history with the European Communities, linked to their establishment and development over the years. This chronology covers the key events involving the Bank between 1958 and 2017.

Founded in 1958 by the Treaty of Rome, the EIB was first located in Brussels before it moved to Luxembourg in 1968.

The EIB Group’s investments in 2018 will have a considerable impact on Europe’s ... 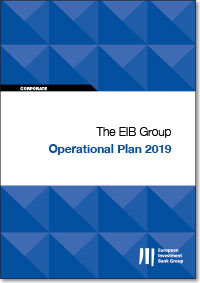 This document includes orientations of performance and summarises the major priorities and activities of the EIB Group in 2019.