Noor Ouarzazate is one of the biggest solar power complexes in the world. Once completed, it will have over 580 MW installed capacity and provide electricity to 350 000 homes in Morocco. The plant is expected to reduce carbon emissions by 760,000 tons per year, and 17.5 million tons over 25 years.

Currently, Morocco imports over 97% of its energy, much of it in the form of oil, which makes it very vulnerable to volatile fuel costs. The Noor Ouarzazate solar power complex is expected to reverse the situation: it will produce carbon-free energy equivalent to that from 2.5 million tons of imported oil, even creating the potential for green exports to neighbouring countries. It will also boost employment and create a local solar industry as part of the process. 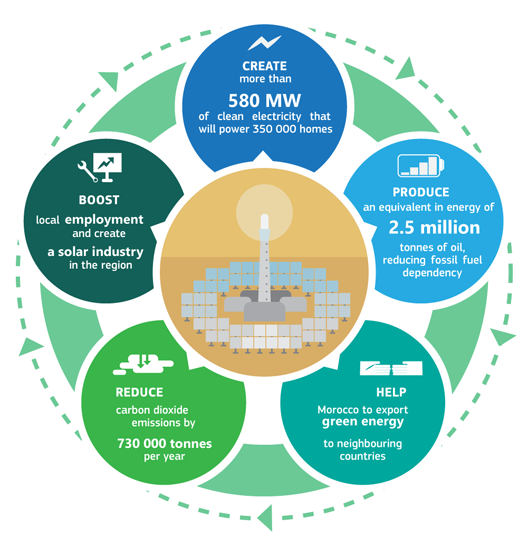 EU support came through the Neighbouring Investment Facility (NIF) which granted EUR 106.5 million to for the Noor Ouarzazate complex. The NIF is an innovative instrument created to co-finance infrastructure projects in EU neighbouring countries and helped catalyse the participation of the EIB, which finances EUR 217.5 million for the three first phases and other investors such as the French Agency for Development (AFD) as well as the German Development Bank (KfW). In total, European funds amount to up to 60% of the project cost.

This is the biggest operation under the EU-supported “Mediterranean Solar Plan”. This plan aims to create additional renewable energy capacity of over 20 GW by 2020 in the Mediterranean partner countries.

Noor Ouarzazate also reflects Morocco’s energy ambitious. The country aims to generate more than half of its power from sustainable energy sources by 2030. Morocco’s renewable energy mix would combine solar, wind and hydro power, with each accounting for 14% of the total mix by 2020.

Eight creative writers went to the desert with no instructions, except to write something amazing. They did.

COP22, EU and the MENA region: Gearing up for the next climate change challenge

Tackling climate change is a global imperative and major political priority for world leaders, spearheaded by EU efforts to cut a deal at the Paris COP21 climate conference. The next huge challenge is to convert the COP21 agreement into COP22 actions that make a real difference to all aspects of our lives — our air, our water and our environment.

The Noor Ouarzazate project is a flagship project in Morocco. But EU supported actions against climate change in the region are not limited to energy policies – they also involve agriculture or water management systems, for instance.

According to the UNFCCC, some countries are particularly vulnerable to the effects of climate change. They are those with low elevations above sea level, with arid or semi-arid territories and subject to extreme weather events, such as floods, droughts or desertification.

Regions such as the Middle East and North Africa (MENA) are included among these vulnerable areas. Projects, large and small, to tackle these problems need strong partnerships and financial support to get off the ground. EU funding and cooperation mechanisms offer strategic support and expertise where it is most needed.

Morocco has been one of the first beneficiaries of EIB’s climate action in Africa. In the last five years, the EIB has provided a total of EUR 500 million for climate projects in Morocco, out of a total of EUR 1.7 billion of investments in the country.

Eight creative writers went to the desert with no instructions, except to write something amazing. ... 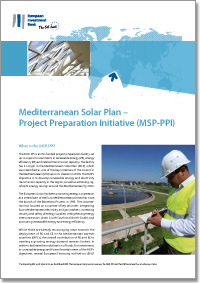 The MSP-PPI aims to accelerate the implementation of renewable energy and energy efficiency projects in several Mediterranean partner countries.

The EIB supports projects in the Mediterranean Neighbourhood that help improve lives for millions ...