CAMENA is a climate action envelope managed by the European Investment Bank within the FEMIP Trust Fund. Its purpose is to help Mediterranean partner countries to fight climate change by providing grants targeted at specific climate initiatives.

The CAMENA envelope was created on the initiative and with the support of the UK Department for International Development, which contributed GBP 15m for a four-year period (2015-2018).

CAMENA is also open to, and would welcome, further contributions from other donors.

The first CAMENA-financed projects were approved in 2015. The envelope will seek to achieve a wide geographical and sector spread to support the mainstreaming of climate considerations across operations in the region.

Study on climate mitigation actions in the Mediterranean

CAMENA and the German agency for international cooperation GIZ came together to finance a EUR 300 000 study aiming to support the implementation of potential Nationally Appropriate Mitigation Actions (NAMA) in the Mediterranean partner countries. The study will create opportunities for climate action investments in the Mediterranean region in both the short and long term.

In the short term, the study will focus on analysing a number of NAMA projects that could already be taken forward to a pre-feasibility phase.

In the long term, it will facilitate the emergence of new climate investments, as it will both map the development stages of current NAMAs and analyse gaps where international financial institutions can intervene to develop them, e.g. via support for financial structuring and modelling or capacity building.

Following on from the “Conceptual Design for the Desalination Plant” financed by the European Commission under EIB supervision, this EUR 600 000 technical assistance operation will support procurement for the on- and off-site power plants to supply the proposed central desalination plant in Gaza.

The plants aim to use renewable energy to provide up to 60% of the optimum power needed for the desalination plant, which, in turn, will help to deliver fresh water to 1.7 million people. In terms of climate change, the project will have both a mitigation effect (by reducing carbon dioxide emissions) and an adaptation effect (by helping to address water shortages).

CAMENA – Climate Action in the Middle East and North Africa 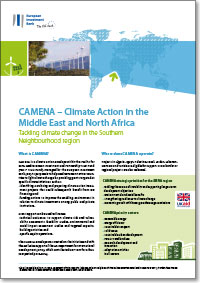 This leaflet explains how CAMENA works, sets out the case for climate action in the MENA region and showcases projects benefitting from CAMENA grant support.