On 29 May 2017, the European Investment Bank (EIB) launched a public consultation as part of the review of the Complaints Mechanism Principles, Terms of Reference and Rules of Procedure. The review process concluded with the adoption of a revised policy by the EIF’s Board of Directors on 12 November and the EIB’s Board of Directors on 13 November 2018.  We would like to take this opportunity to thank everyone who contributed to the process.

One of the main objectives of the EIB Group Complaints Mechanism is to ensure the right to be heard and the right to complain of EIB Group stakeholders, thus giving voice to their concerns regarding maladministration.  Addressing complaints of any kind is a Group-wide responsibility as it helps the EIB Group to enhance its performance and activities.

All relevant documentation regarding this public consultation can be found in the below table. 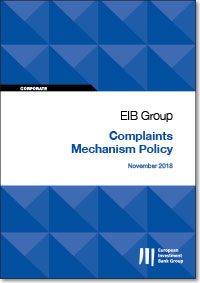