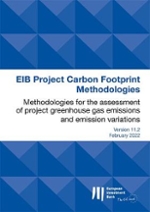 The methodology is used to calculate the carbon footprint of the investment projects financed by the EIB. These carbon footprints are published on the project’s Environmental and Social Data Sheet (ESDS). The EIB also publishes the aggregated results annually as part of its Carbon Footprint Exercise (CFE) in the EIB Group’s Sustainability Report.

Whilst project carbon footprinting is mainstreamed into the Bank’s operations, it remains under regular review. The Bank works closely with other financial institutions and stakeholders in its footprinting work and welcomes further feedback on the methodology. The EIB’s methodology is in line with the International Financial Institution Framework for a Harmonised Approach to Greenhouse Gas Accounting, published in November 2015.